A couple of seasons have passed since the sunshine reflected on a burgeoning fleet of NHYC catamarans.

West side, Rick Stein’s diners gaze down at the two Dart 18s Kev’s “Concrete Boots” and Big Tim’s “Off Your Trolley” nestled alongside my Hobie 16 “Aristocat”. 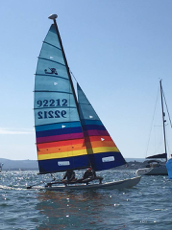 Meanwhile, East of the club the H16 pride stretched out with the addition of The Admiral’s “Mad Catter”, Captain Ebay’s “Catnip”, and a Hobie 14 sibling “The Kid”.

Since then, following one too many pitch-poles, Aristocat was, sadly, finally beached for good prior to the start of the 2020 season. Over that complicated summer, with one eye on a replacement, I satisfied the need for speed aboard Mad Catter!

So what’s the attraction you may ask?

Thrills, spills (it is legal to project family members head first over the bows into the brine at boat speeds in excess of 30kph), and a draft that is less than a crab’s appendage (claw in case you were wondering), fairly useful within the confines of the harbour. Well what’s not to like? 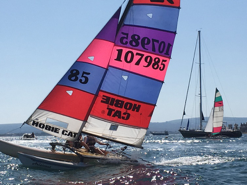 Over the course of the last few years, I have hung from a trapeze to skim and often crash right through the surface of a large proportion of Poole harbour, racing around the islands, or beaching to camp on Brownsea with the NHYC kids’ club.  We have ventured out to Studland bay on favourable wind and tide conditions, to come flying back in past the Sandbanks ferry.

In 2020, myself and the Admiral were strongly considering entering the Hobie 16 Nationals, an event which sadly was to inevitably fall the way of most…

Join us! We have moorings available for most types of boat up to 10.7m length and 1.5m draft. If your boat is just over these dimensions, please contact us – we may still be able to help!

Come and meet us…